What is an explosion? 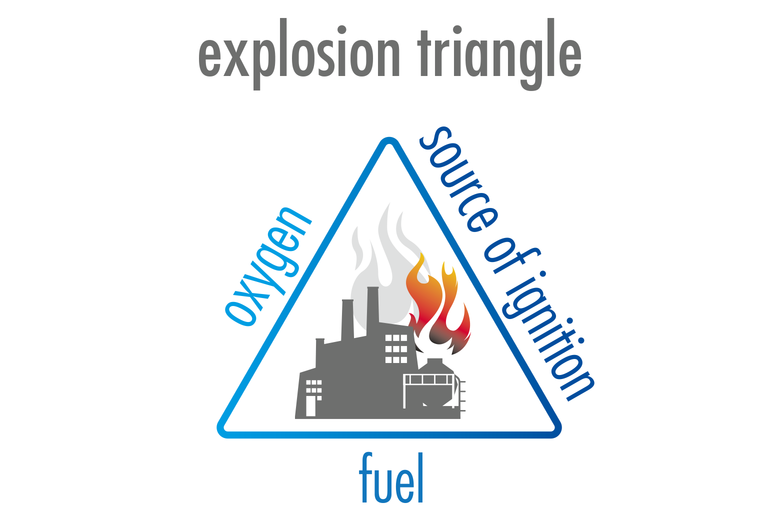 According to DIN EN 1127-1:1997, an explosion is an oxidation or decay reaction generating an increase in temperature or pressure or both simultaneously.

So that an explosion can occur, three conditions must be fulfilled; see the explosion triangle diagram.

If one removes one of these three conditions, an explosion cannot occur.

A potentially explosive atmosphere is understood to be a mixture of a combustible material and oxygen. Oxygen is generally present as a component of air. Combustible materials can be e.g.: gases, fluids, vapours, mist or dusts.

The terms "potentially explosive atmosphere" and "flammable mixture" are frequently used as synonyms. This mixture or atmosphere can be caused to explode by a source of ignition.

The capacity to explode depends on the material used, its flammability and the mixture with air or oxygen. If the mixture is the result of mixing with oxygen from the air which has a different composition from that normally found in the environment, then the proportion of oxygen must be examined closely. If the proportion of oxygen falls below a certain value dependent on the material, known as the oxygen limit concentration, then this mixture cannot be ignited.

This effect is exploited in what is known as inertisation in which oxygen is replaced by an inert gas, one which is not suited to oxidation. All the same, the concentration of the flammable material in the air mixture must lie between the lower and upper explosion limit.